A State of Siege

A personal, creative documentary of a Druze filmmaker living in the Golan Heights, about isolation and longing to a homeland

20,000 Druze live in the Golan Heights. They identify themselves as Syrians. After the breakout of the war in Syria, the community was torn not only with conflicts that were associated with the occupation. They were divided between being pro or against president Assad regime, but also found themselves faced with more existential questions, of identity and fate.
We set out on a journey with director Waseem Safadi, born and raised in the Druze village Majdal Shams (Tower of the Sun) in the Golan Heights, to discover the inner world of the Druze. We meet with different personalities from the area and experience the absurd and unique reality of the Druze community, living near the lines of ceasefire between Syria and Israel.
A film by Waseem Safadi 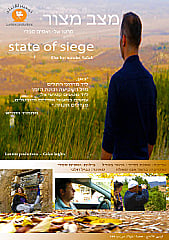